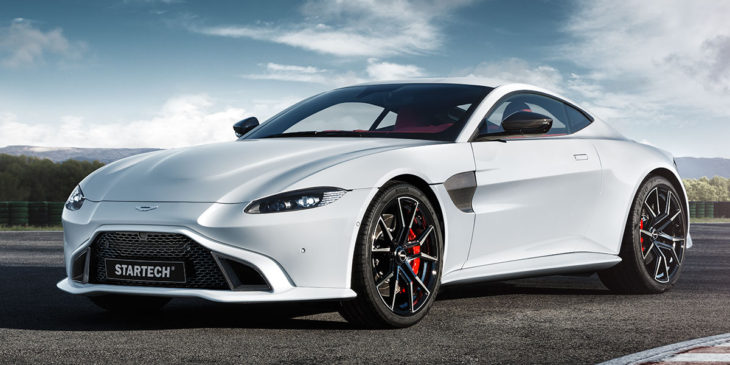 Back to the overview

Following the exclusive customization range for the Aston Martin DB11 last year, STARTECH now turns its attention to the next sports car from the British brand.

At the Geneva Motor Show 2019, the first Aston Martin Vantage refined by STARTECH celebrates its world premiere on the 20th anniversary of the German refinement specialist.

With the STARTECH SP 600 performance upgrade “powered by BRABUS,” the German refinement specialist draws on the tremendous expertise of its parent company. Because the 4.0-liter twin-turbo V8 of the Aston Martin Vantage is supplied by Mercedes-Benz, the BRABUS product range held a tried and tested performance upgrade. As a result of the STARTECH engine tuning to 441 kW / 600 hp and the increase in torque to 775 Nm, the coupe accelerates from rest to 100 km/h in just 3.4 seconds. The top speed increases to 320 km/h.

The looks of the two-seater are also given a sporty upgrade with tailor-made bodywork components and STARTECH Monostar M 21-inch wheels with center-lock look.

Another STARTECH specialty is the customization of the interior. The company upholstery shop creates interior appointments tailored to the particular owner’s requests with utmost precision. 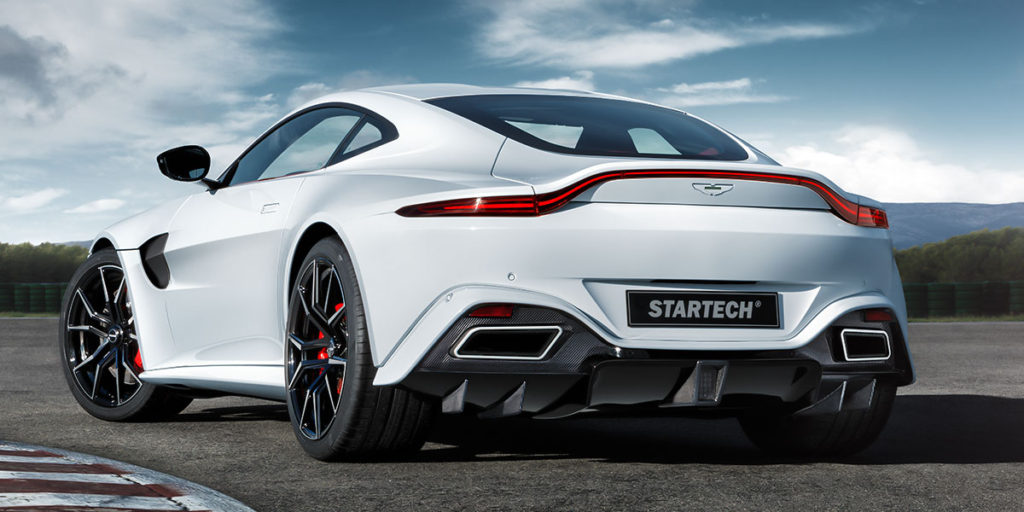 The Aston Martin Vantage engine comes from Mercedes-Benz and as a BRABUS GROUP Company, STARTECH is able to draw on a broad range of engines for the models of the Swabian brand.

The four-liter twin-turbo engine of the Vantage normally powers the current Mercedes C 63 AMG models. This meant that the performance kit for the current Vantage could be derived from the BRABUS performance levels for these vehicles. Like all other STARTECH components, this performance upgrade also comes with a comprehensive warranty (see STARTECH Warranty Terms and Conditions, updated May 2018).

This in-house technology transfer resulted in the STARTECH PowerXtra SP 600 performance kit “powered by BRABUS” for the smallest Aston Martin: The calibration to the specifications of the Vantage was done using state-of-the-art test bench technology and extensive test drives on racetracks and public roads. The outcome is impressive. The rated output was bumped by 66 kW / 90 hp, while peak torque increased by 90 Nm to 775 Nm at a low 3,100 rpm at the same time 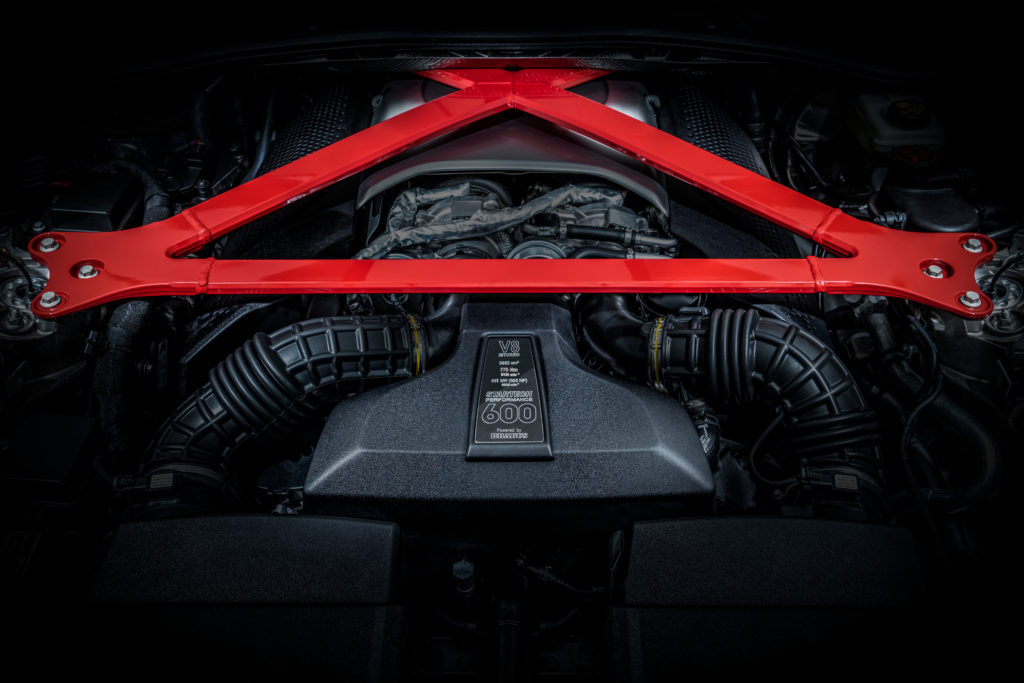 To this end, STARTECH integrates a plug-and-play auxiliary control module into the engine electronics, which governs injection and ignition with new mapping and moderately increases the boost pressure as well. Peak output jumps from stock 375 kW / 510 hp to 441 kW / 600 hp at a low 6,000 rpm. At the same time, peak torque increases from 685 auf 775 Nm, on tap constantly between 2,000 and 5,000 rpm. The driving performance of the refined British sports car is accordingly outstanding: The eight-speed automatic transmission harmonizes excellently with the STARTECH performance upgrade and as a result only 3.4 seconds pass before the car reaches a speed of 100 km/h from rest. The top speed increases to 320 km/h.

To give the Vantage an even sportier appearance, the STARTECH designers revised some of the details on the bodywork. They developed two inserts for the large intake in the front fascia, which gives the front of the two-seater an even more aggressive expression and redirects the airflow even more precisely and effectively to the front brakes. These components are available as PUR variants or made of naked carbon with glossy or matte coating. That same hi-tech composite material also is used for the STARTECH air vents behind the front wheel arches and for the side mirror caps. 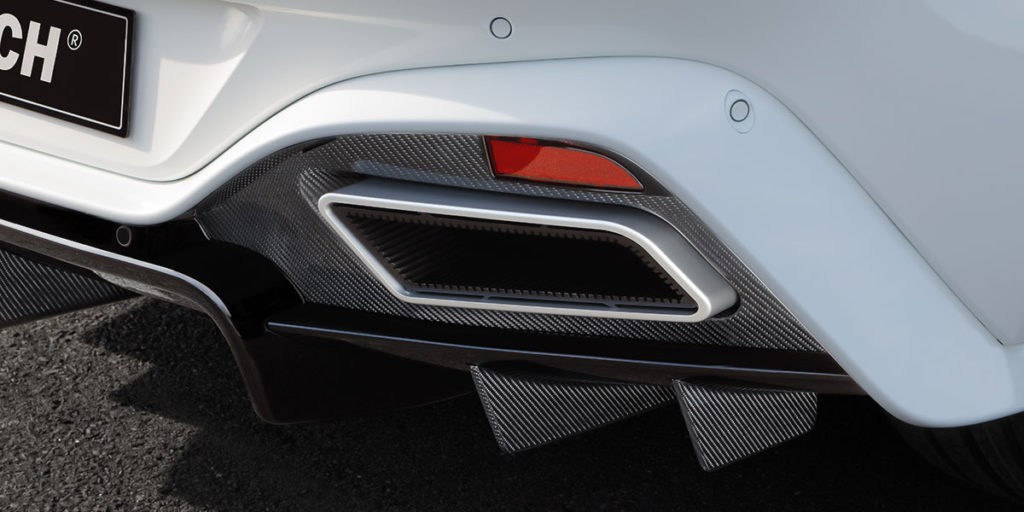 The STARTECH designers also revised the rear end in a way that visually and technically looks to motorsport for orientation: The rear fascia was fitted with a new diffuser, likewise available as a PUR-R-Rim or naked-carbon variant. The show car in Geneva sports the naked-carbon version. Its four vertical fins make the refined Vantage seem to come from GT racing. The central LED backup light in Formula 1 design has the same effect. In addition, the two STARTECH exhaust tips, which are combined with the production exhaust of the sports car, gives the Aston Martin an even more thrilling rear appearance. 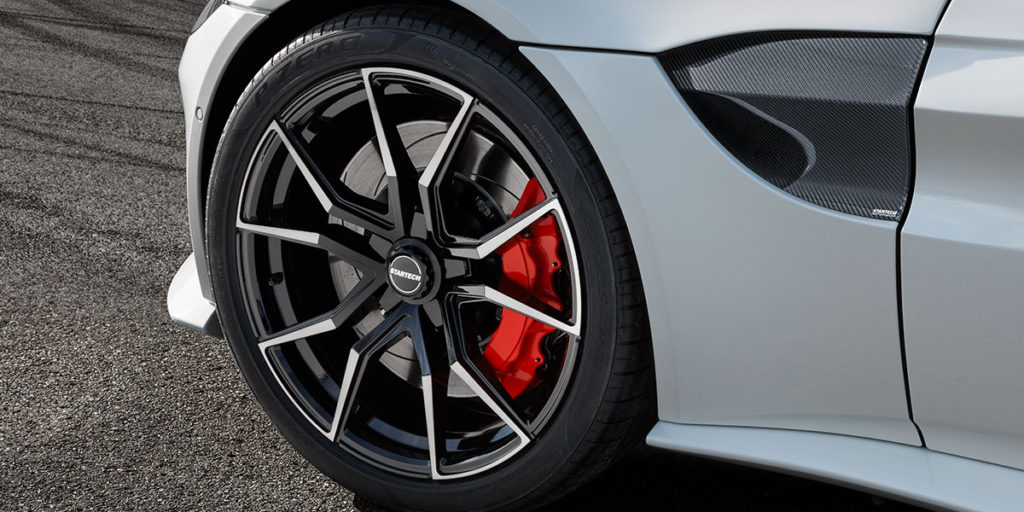 STARTECH Monostar M 21-inch alloys tailor-made for the current Vantage further characterize the exclusive looks. They come in different variants. The design featuring five pairs of spokes is combined with a hub cover that gives the wheel a center-lock look as in motor racing. The stylized center nut is available in black, silver, red or blue anodized.

At the Geneva Motor Show 2019, STARTECH presents the refined version of the Aston Martin Vantage with Monostar M alloys in a sporty-elegant variant on which the surfaces of the black painted wheels were ground and then sealed with a smoke-colored clear coat. The front axle was fitted with wheels of size 9Jx21 and shod with 275/35 ZR 21 Pirelli P Zero high-performance tires. The rear axle runs on wheels 11.5 inches wide with tires of size 325/30 ZR 21. 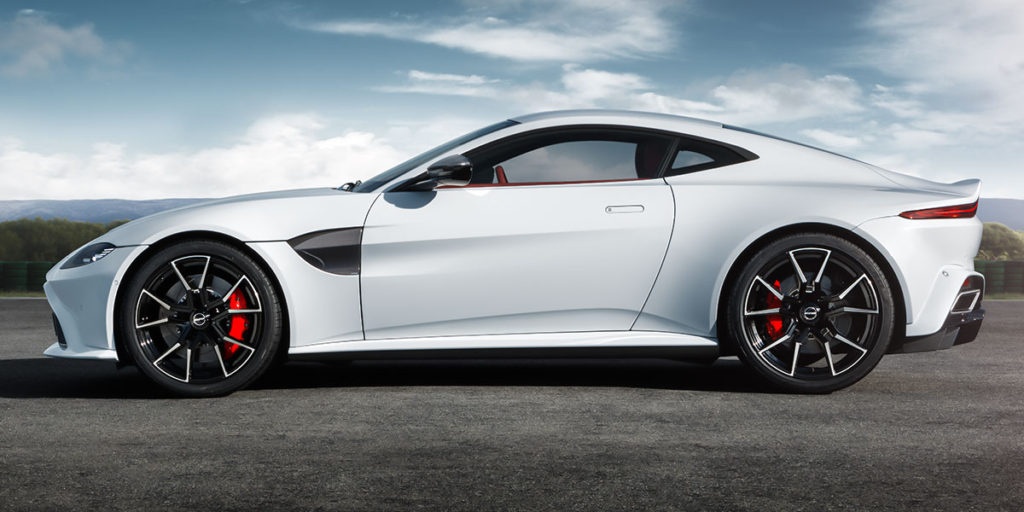 Stay informed with the STARTECH newsletter

Here you can find an overview over all cookies we use. You can give your consent to whole categories or show further information and edit your preferences for specific cookies.

Statistics cookies collect anonymous data about user behaviour. This helps us understand how visitors use our website and how we can optimise our services for you in the future.

This website uses cookies. We use cookies to personalise content and ads, to be able to offer social media content and to analyse user behaviour on our platform. We also share parts of the collected data with our partners for social media, ads and analysis. These partners might combine our collected data with the information you provided while using their services. Cookies are small text files that are used by websites to optimise the user experience.According to German Laws, we are allowed to store essential cookies on your devices to ensure the proper functionality of our website. For all other types of cookies, we need your explicit consent. This website makes use of different types of cookies. Some of these cookies were provided by third parties if we use their services. You can withdraw or change your consent any time in your cookie preferences. You can learn more about who we are, how we process your data and how you can contact us in our privacy policy.